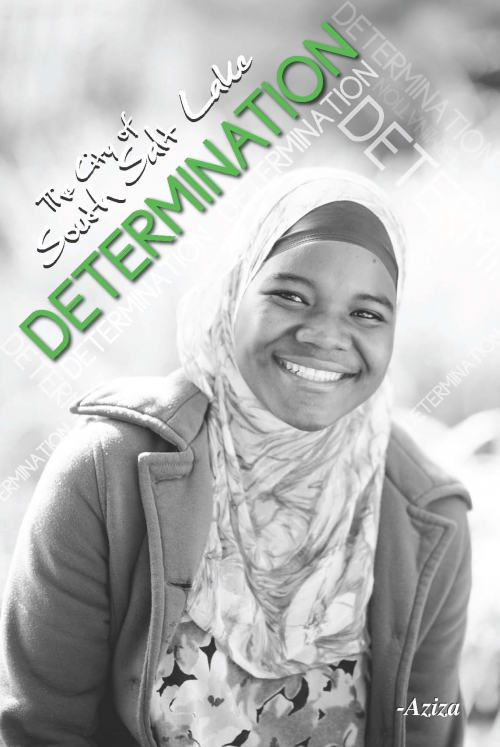 Aziza is a 16 year old participant in the Leadership and Resiliency Program through the Housing Authority of the County of Salt Lake. When she first started the program she was very unsure about her future but through her determination, she’s received a $1,000 scholarship through the Reflections contest writting an essay she wrote about her life. Her determination goes beyond making sure she has a bright future, she is also very dedicated to helping others. She currently babysits all of her nieces and nephews and volunteers at the English Skills Learning Center where she teaches adults English.

“The price of success is hard work, dedication to the job at hand, and the determination that whether we win or lose, we have applied the best of ourselves to the task at hand.” ~Vince Lombardi

“Failure will never overtake me if my determination to succeed is strong enough.” ~Og Mandino

“Determination gives you the resolve to keep going in spite of the roadblocks that lay before you.” ~Denis Waitley

“The difference between the impossible and the possible lies in a man’s determination.” ~Tommy Lasorda

“Happiness is an attitude of mind, born of the simple determination to be happy under all outward circumstances.” ~J. Donald Walters

Determination is a positive personal character trait. A person with determination is someone who is earnest or unwavering in his or her purpose. If there is something this person wants to do, he or she will not give up easily or get distracted by something else.

A person who is determined has a firmness of purpose and the resolve to achieve a goal. It is a fixed intention or resolution to overcome obstacles to obtain a benefit.

If there is a possibility, a determined person will try to achieve the goal. Of course, there are some things judged out of your reach. The ball player would be foolish to run after a ball hit out of the ballpark.

The motto of the U.S. Marines, which goes something like: “The difficult, we do right away. The impossible takes a little longer.”

Some people give up too soon.

A person may have a goal to do something, but then the task seems more difficult than he or she thought it would be. The person then weighs the desire to achieve the goal versus the work required and can decide to quit. For example, a young man may want to get a job as an electrician. But then he finds that he must take classes and go through a two-year apprenticeship. To him, that is too much.

Another situation is if the person does not have confidence in his or her ability to complete the task. For example, suppose a girl wanted to get into the school play. She dreams of having the lead role, but then when audition time comes, she feels she isn’t good enough to make it, so she backs out.

Some people jump from one thing to another, without completing what they started. They aren’t very determined to achieve their goal.

One major benefit of being determined is that you achieve what you set out to do. If it was a good goal, you will reap the benefits of that achievement.

People can have a positive opinion of people who are determined. A person who is steadfast and determined to achieve an honorable goal is admired as having good character.

There is personal satisfaction in achieving what you set out to achieve, and that achievement can make you feel like a champion.

Some people quit too soon. If you are determined to achieve your goals, you will most likely reap the rewards of your hard work. It also is an indication of your character.

The Man Who Walked Between the Towers by Mordicai Gerstein

The Boy who Invented TV The Story of Philo Farnsworth

Letters from Rifka by Karen Hesse

Determination in the Workplace:

In order to get the most out of your employees, it is important that they not only have a fun, safe, place to work in and atmosphere but also that they are driven and focused to maintain a high level of work ethic while focusing on the overall goal or mission of the company. Some ways to increase determination in the workplace are:

1-Draw inspiration from others

3- Strengthen your will by exercising it

4- Think about what you really want

5- Imagine an iron core within you